For tea ceremony, the month of October is a month with special details that are used exclusively during this time of the year.

I speak about oita and nakaoki. 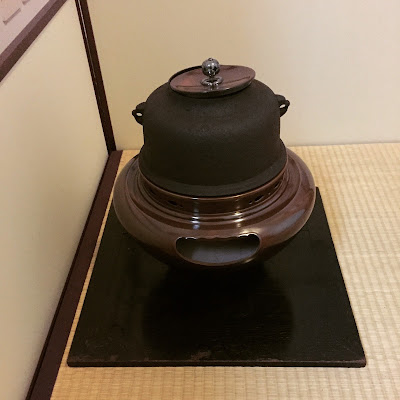 Oita is a lacquer wooden shelf larger than shikiita that it's placed under furo.
It is used like a tana and also hishaku and futaoki are placed on it. 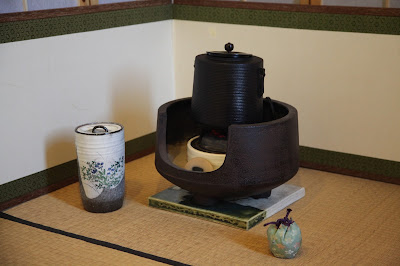 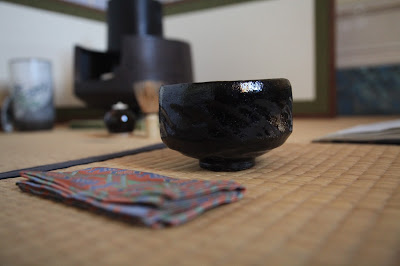 Nakaoki is a setting mode with furo in the middle of the tatami and mizusashi on the left side. It's common to use an hoso mizusashi. With this setting change a little the position of the other toys.
And now some photos of hoso mizusashi 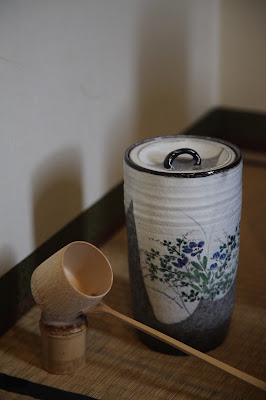 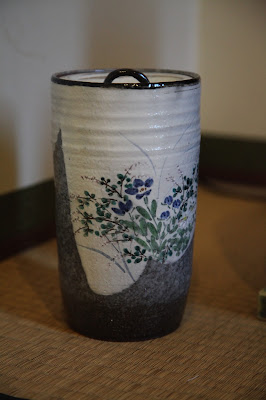 In this month, for Omotesenke School, is often used a particular chaire, called akoda, with the design of a gourd. 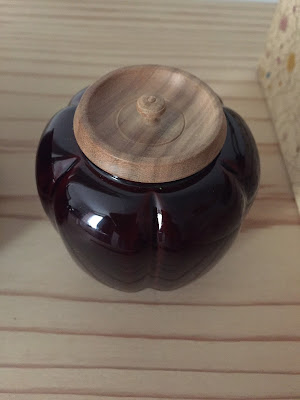 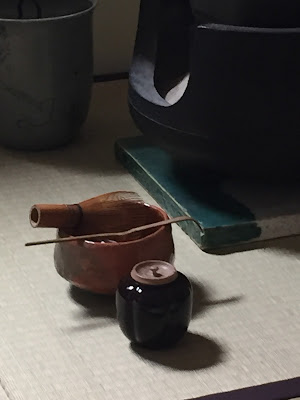 September is the right month to do Mawaribana: one of the "Seven Lessons".
In this lesson all the students and also the host make a little chabana with the flowers provided by the School and make a composition usually inside a three windows bamboo hanaire.
To give you an idea I took from Internet he below picture so you can see a typical setting. 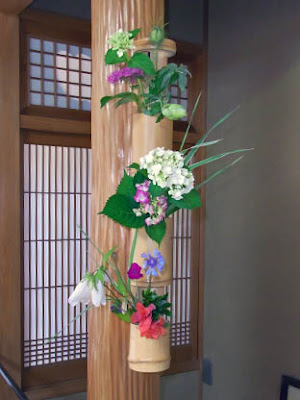 All the students and the host alternate themselves to make a little floral composition and repeat this for three times changing the first compositions with the latest until the end of the lesson. 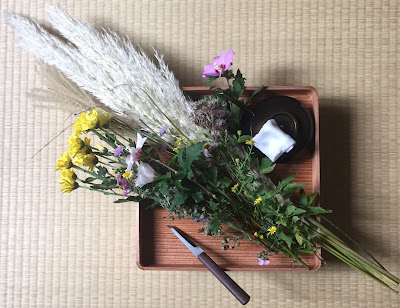 The host come in the room doing sorè with the tray of flowers set up as in the top picture. Then she goes to set it inside tokonoma where it will be set up an empty hanaire but with the water inside. 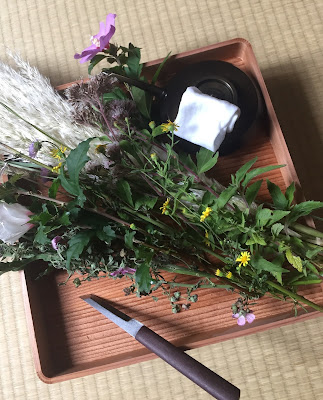 The students, starting from the first, will turn to create small chabana, filling each one window of the flower pot and helping themselves with knife to cut the flowers at the right height. Then it will be the turn of the host and again the students up to three cycles. It is normal to different compartments according to the cycle as it's normal the it once the flower pot is full, the students or host must remove flowers to replace their small composition. At the end the host will pour some water inside each window and take away the tray with the flowers not used, waste and the discarded flowers that the students have taken out of the flower pot.
It's important to remember some basic rules:
1) the flowers are first adjusted on the hands and not directly in the flower pot, and this is also true for measuring the right height of the composition.
2) Care should be taken when cutting the flower's stems with the knife because it is usually very sharp and it is very easy tu cut ourself.
3) First remove the previous flowers and the pick the new flowers and create composition. In the tallest compartment, if possible, try not to let the flowers out of the topo but only from the "window". Higher flowers usually go to the upper compartment.
4) It is possible to use the same flowers in different compositions but the variety is preferable.
5) Once you remove an old composition or relay on the trimmings of the stems of the used flowers, you should care to put them next to the other flowers on the tray, try to bring them together as in a "single deck".
6) The tray is carried with two hands holding it on both sides.
7) When making floral composition you follow the simple rules of chabana.

Below a picture of a beautiful painting that shows just this lesson. 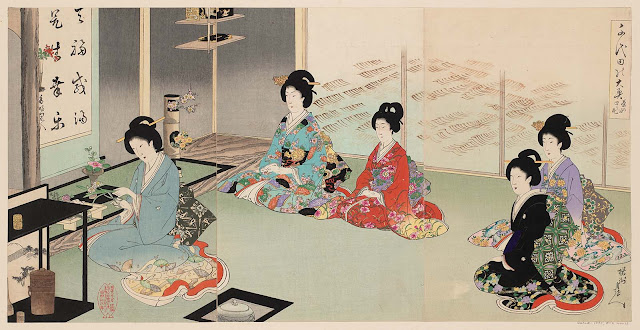